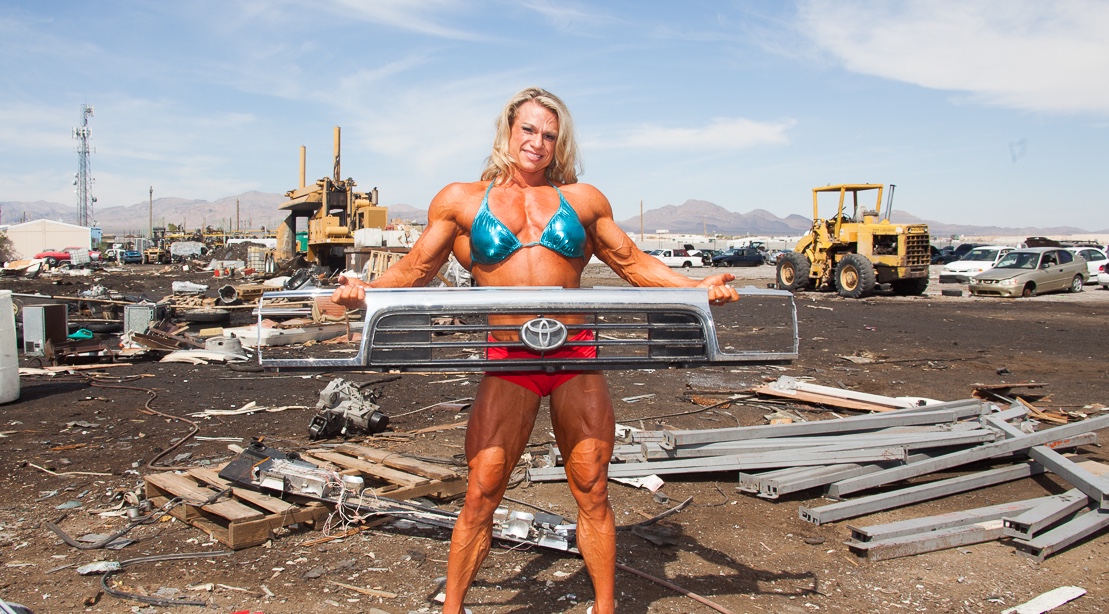 One reason I have such an impressive library of female bodybuilding photos is that, over the years, Joe Weider assigned me to shoot so many legendary women and gave me access to them. Since I started working for and with Jake Wood and Wings of Strength, this kind of access to many of the top female muscle women has continued.

For example, a few years ago Jake invited me to come to Las Vegas and do a number of photo sessions. One of them was with the fit and fabulous Tina Chandler. The choice of location was left up to me. Many years ago, I did a fabulous shoot in an auto junkyard with Mr. World Bill Grant, one of my first training partners. So, I looked around for a wrecking yard I could use to do the same sorts of photos with Tina.

After a few phone calls, I found a junkyard that would allow us to do photos without any undo concerns about insurance. The owners had never seen a real female bodybuilding in shape before, but they were extremely impressed and cooperated fully in our efforts.

And, of course, Tina looked awesome. During her childhood, Tina had been a competitive gymnast. Gymnastics has been the foundation of a number of great bodies, including early fitness and bodybuilding star Alphie Newman and superstar model Pamela Anderson. Tina was an all-around athlete as a youngster, playing volleyball, basketball and tennis, running track and seriously into cycling.

As part of her training, Tina began spending time in the weight room. “I had never realized how much muscle women could develop, or how good it could look,” says Tina. “But I saw the women in Muscle & Fitness and Flex and that inspired me to train even harder and see what I could accomplish in developing an aesthetically muscular physique.”

Tina Chandler attended her first bodybuilding competition, the SW Texas State, in 2004, which she won. She won her IFBB pro card after coming in 1st in the middleweight class at the 2007 NPC Nationals.

“I’m glad that Jake Wood gave me the chance to shoot these photos with Bill Dobbins,” says Tina. “And especially excited about his bringing back the Ms. Olympia. This contest has always served as an inspiration to all aspiring female bodybuilders. Being able to place in the top 10 at the Ms. Olympia was one of the high points of my life and career.”

Previous
This Anti-Inflammatory, Skin-Soothing Oil Is A Superstar Beauty Botanical

Elevate your workout to the next level.
Go to Appearance > Customize > Subscribe Pop-up to set this up.
More Stories
The 12 Best Soaps For Dry Skin Of 2021