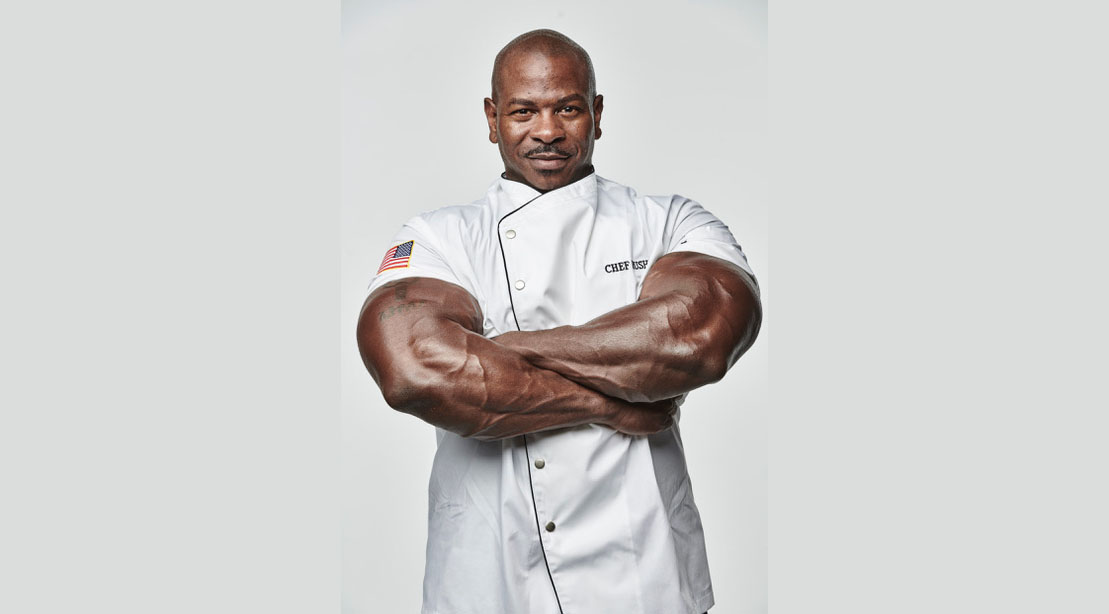 When people look at Andre Rush, their eyes normally gravitate toward the chef’s ginormous arms. His incredible development makes bodybuilders stare in awe, which prompts plenty of requests for arm-training tips. But his commitment to training began with a totally different origin from what he is known for today — it was a challenge to lift a car from his father.

“Every day for six months I would go over to one of those heavy, old-school cars,” he recalls. “Then one day, I got my hands under this car, and I lifted it up. When I went and told my dad, the only thing he said was, ‘It’s about time.’ I thought he was going to be proud like the other guys there were, but he was hard like that.”

Of course, his other big passion is what he’s known best for: his culinary skills. Andre Rush has worked as chef in the White House for Presidents Clinton, Bush (43), Obama, and Trump. That love for food can also be traced back to his childhood spent in the kitchen with his mother.

“I would sneak in the kitchen and go cook with my mother without [my dad] knowing. I just remember how it felt when I went and cooked with her,” he explained proudly. “I’m a mama’s boy, and it meant everything in the world to me. The first meal we made was chicken and cabbage. It’s like my closure meal.”

Having the passion to succeed is one thing, but being as successful as Rush has become requires a totally different level of consistency, one that requires making a commitment and sticking to it, sort of what he learned during his days in the military.

“Because of what my mother taught me and what my dad established in me as far as work ethic, everyone around would gravitate toward me, and we would train and train and train,” he says. “I realized that training was a niche. Everybody needed to train because they want to be bigger, badder, and stronger. That is also why I put in time in the culinary or nutrition aspect, to support what you’re doing.”

The chef is constantly asked about his diet and a breakdown of his macros. His answer usually surprises most: Rush actually doesn’t do much counting. Thanks to all of the years he invested, he says his body has become programmed. However, he still makes sure to keep tabs on his overall health.

“I always get my blood work religiously, and I always check to see if there are any underlying issues,” he says. “What I tell people all the time is I need to know what’s going on inside of my body first before I put anything inside of my body, whether it be food or multivitamins.”

The chef has added a shot of flavor to his latest collaboration, teaming with whiskey giant Southern Comfort to produce Trail ReMix, a healthy, whiskey-infused jerky snack, can be a tasteful way to keep on point.

“My first drink when I got out of the military was Southern Comfort,” Rush says. “This opportunity brought back so many memories and vibes, and this is a great product. One pack has 150 grams total of protein. There are complex carbs and fats as well. It can be part of a meal, it can be a snack on its own, all of the above,” he said.

Andre Rush says people often ask how they can train like him and acquire a set of guns such as his. Rush always points out that anyone’s focus should be on what is best for them individually, not mimicking his routine.

“I tell people you shouldn’t try to do what I’m doing,” he says. “You weren’t in the military for the time that I was. You couldn’t get up at three o’clock every morning and meditate like I do. You can’t do the pushups that I do, and that’s OK. Figure out what you can do and work at that to make the difference.”

Previous
How To Paint Nails With Your Non-Dominant Hand, From A Specialist

Next
Why Well-Being Experts Recommend calm+ For Stress Management*

Elevate your workout to the next level.
Go to Appearance > Customize > Subscribe Pop-up to set this up.
More Stories
Keep Your Cool During Mercury Retrograde With These 5 Tips