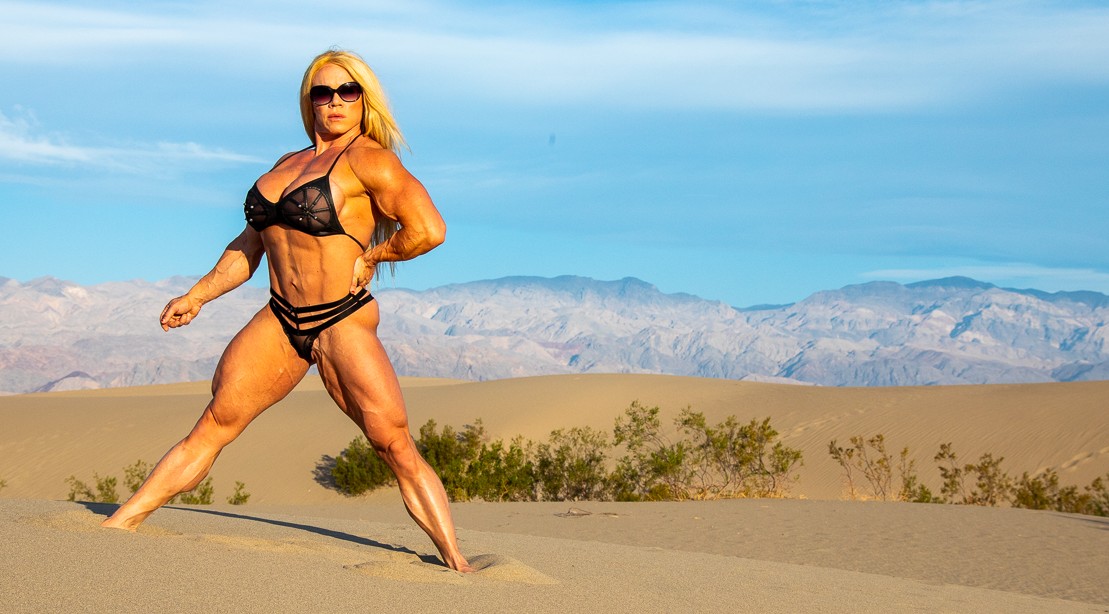 People giving training advice often talk about exercises that change the shape of muscles. For example, some trainers claim you can develop longer muscles with Pilates or yoga compared to weight training. The problem is, this is not true. You can change the size and volume of muscles depending on what exercises you do, but the shape is determined by genetics.

Here is an illustration: Suppose you have some children’s balloons. You blow up one and it is a long, cylinder shape. Another is very round. You can keep blowing up each type and making them bigger, but the cylinder-shaped balloon will never turn into a round one and vice-versa. The shape is determined by how the balloon was manufactured and that can’t be altered.

The same is true for muscles. Some are designed to be long, cylinder shapes, other full and round and some might be somewhere in between. You can make these muscles bigger, but their genetic shape says mostly the same.

If you don’t believe in the tyranny of genetics, try getting taller.

If you want an example of a female bodybuilder with muscles that are really round and full just look at Aleesha Young. She is a perfect example of this kind of body type. By contrast, the legendary Sharon Bruneau, who had big and aesthetic muscles, did not have this kind of genetics. Part of her appeal was her long and elegant muscle structure, that of a former fashion model. This body type made it almost impossible for her to defeat somebody in competition like Lenda Murray, whose muscles were genetically fuller and rounder.

Of course, even the amazing Lenda didn’t have quite the degree of incredibly round and full muscle structure of Aleesha Young. But aside from size and fullness, Aleesha is also beautiful and highly aesthetic. Qualities necessary in become a champion, pro female bodybuilder.

Aleesha says she inherited excellent genes, because she comes from an athletic family. Her father is a retired bodybuilding competitor, her brother plays American football and ice hockey, and her sister plays ice hockey. Young herself first pursued her interest in softball, cheerleading, basketball and soccer, and didn’t begin to do bodybuilding training until the age of 15, alongside her father.

After turning pro, she quickly took advantage of the contests being held by Jake Wood and the Wings of Strength organization. In 2019 she placed first at the WOS Chicago Pro Championships, after which she set her sights on the Rising Phoenix World Championships.

“Building muscle is one thing,” Aleesha says, “but diet and contest prep something very different. The quality of the top competitors at Wings contest is awe-inspiring. I felt I had pretty much found the formula when I won in Chicago and was very confident about my chances in Phoenix in 2019. But, as they say, life is what happens to you when you are making other plans.”

What life had in stored for Aleesha was a fairly serious auto accident. She didn’t suffer any permanent, lasting injury, but she was pretty banged up, which seriously interfered with her training schedule. “I was not able to be anywhere need my best,” she admits. “But I’d made a commitment to Jake Wood and Wings, so I entered the Rising Phoenix anyway.

After the contest, Aleesha agreed to drive out to the desert with me for a photo shoot. I picked Death Valley, Ca. as a location because I wanted somewhere powerful and dramatic enough to match Aleesha’s overpowering body and physical presence. The landscape was “larger than life” and so was Aleesha. We got out into the sand dunes at dawn. That choice of time was important. We had sun but the temperature in DV, statistically the hottest place on earth, was very tolerable. And as we wrapped a few hours later, we saw a change in the weather. It became overcast, with a sharp, hot wind. We had really lucked out in having the right kind of weather circumstances for our photo shoot.

But we had the photos we needed, some of which we are sharing here with you. In 2020, Aleesha is heading back to the Rising Phoenix, this time injury free. And perhaps the Ms. Olympia immediately after. In any event, she will remain a perfect example of a full-bodied, shapely, metamorphic and aesthetic champion female bodybuilder.

Stay tuned for a great future for Aleesha in the sport.

Next
Book Review | The Talent War: How Special Ops Win on Talent

Seiko 5 Sports GMT Is a Bargain Buy for Globetrotters