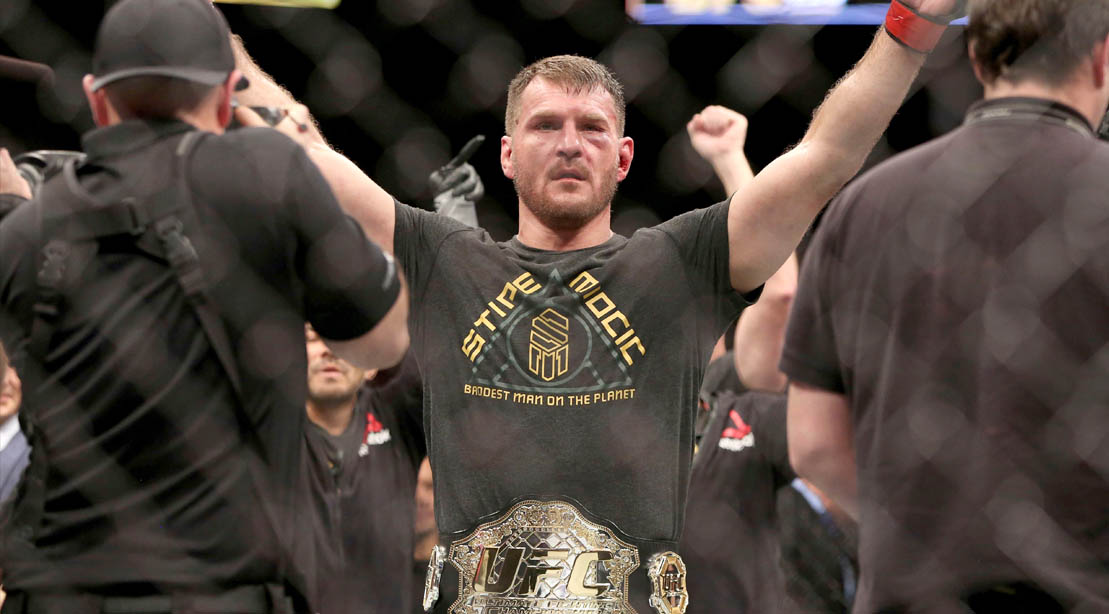 Stipe Miocic is Conditioned To Outlast All Opponents

Even when the arena is empty as was the UFC Apex in Las Vegas, it’s nearly impossible not to be wired when you enter the cage. “It was kind of weird at first,” Miocic admits, “just because usually there’s people screaming. But once you get into the Octagon, it’s like, here we go!”

Arguably, August’s fight against Cormier may have been the least physically taxing part of the MMA training process considering the terrible two-a-days pro Miocic goes through, part of the reason Miocic says he relies on daily arsenal of Kill Cliff for pre- and post-workout drinks.

With 23 career pro fights worth of wear and tear on his 38-year-old body, remaining healthy, flexible and injury free top Miocic’s list of training goals at this point of his career. In addition to inhaling Kill Cliff CBD (“I have a fridge full in the garage,” he says. “I’ll usually drink two or three of those a night”), regular chiropractor visits along with a near daily dose of Epsom salt baths have become his recovery norm.

Staying in top shape these days meant changes to Miocic’s conditioning regimen. No longer is outdoor running a viable training option. Instead, the champ opts for a few days of week of the AlterG anti-gravity treadmill, which he calls a joint saver.

But the biggest adjustment made to his conditioning routine he says was by adding high-intensity aquatic training to his repertoire. The coaches wanted Miocic working hard, while going soft on his joints by adding pool sprints and punch drills. To both Miocic’s benefit and agony, they even thought outside the box by pointing the champ to the bottom of a swimming pool, where waiting for him was a 5 to 10 pound weight for him to retrieve and return back to the surface.

It was a rough way to finish a workout, but Miocic credits this move with helping him last five rounds against Cormier.

“It was terrible,” Miocic says. “We did sets for that, which just blew up my lungs. That was hard.”

For travel purposes, especially during COVID times, training in his backyard pool had its logistical benefits, but water training was a great benefit in easing unneeded stress on his joints, which allowed Miocic to train continuously at a high level with little risk of overworking his aging joints.

“It would come at the end of the workout, which sucks,” Miocic admits. “You’re already tired. But you got to get the conditioning moving. And normally I’m sore and banged up from training hard. But once I got to the pool, it was so much easier on my joints. And even though I was training hard, it still felt like I was able to recover.”

Previous
How To Manifest, Based On Your Personality Type

Elevate your workout to the next level.
Go to Appearance > Customize > Subscribe Pop-up to set this up.
More Stories
5 Mental Health Mantras To Try During The Holiday Season