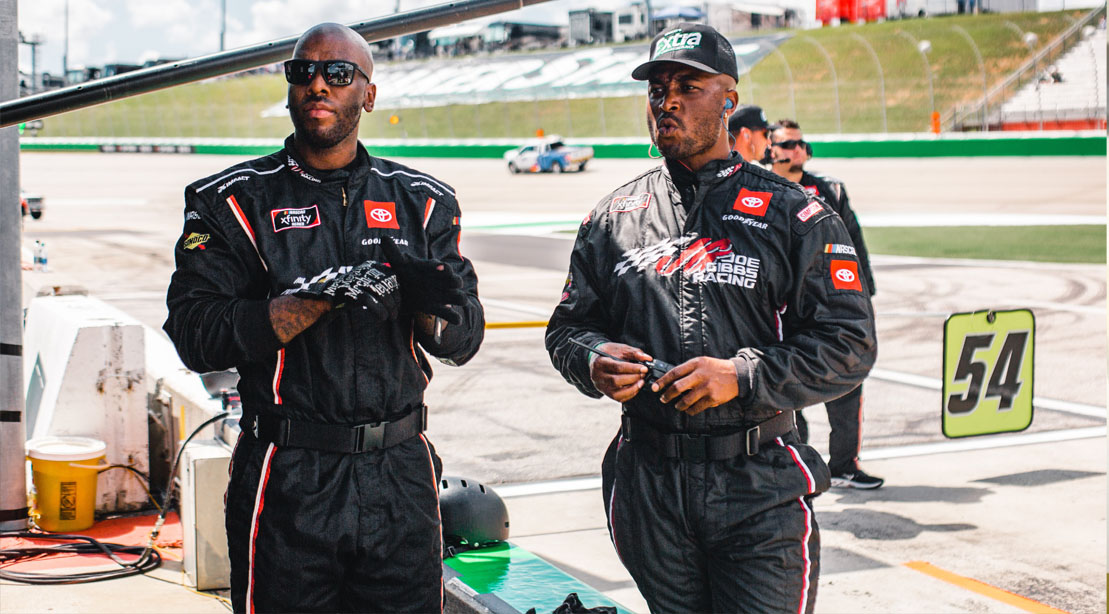 NASCAR May Have Its Best Athletes Down in the Pit Crew

These were terms that were foreign to Derrell Edwards while he was helping lead High Point University Men’s Basketball Team to back-to-back Big South Regular Season titles. Now, as a jackman for Joe Gibbs Racing for the No. 11 team, driven by Denny Hamlin, that lingo is commonplace.

There are certain aspects of the sport that serve as learning experiences for the seven-year vet and alumnus of NASCAR’s Drive for Diversity Pit Crew Program, but thanks to the performance care and individualized programming by head athletic trainer Lindsey Jones and her team at Joe Gibbs Racing, Edwards can always be certain he’ll have all the resources available to be at his physical best.

We spoke with Edwards, Jones, and pit crew coach Matt Osborn on what assets are valuable to have when recruiting for new pit crew members and the steps they take at JGR to ensure that their guys are always ready when they jump the wall.

OSBORN: The intangibles are really important or the stuff that’s kind of hard to measure — it’s more quantitative than qualitative. We’re looking for great athletes of course but the interesting part is when we bring in guys like Derrell, who has top-tier collegiate basketball experience, different than the NBA, NFL, or MLB where they get to recruit guys while observing their history in the sport, we have to have really quick learners. If you’re one of those guys who have to be shown constantly, you’re going to drown in NASCAR because there is too much to learn in too short of time, so we’re looking for guys that are quick on their feet, mentally speaking. You have to have a pretty good sports IQ. We kind of “test” for those things when we’re recruiting by effectively just doing a trial run of giving guys new tasks and seeing how quickly they respond and pick up those skills.

Generally speaking, I would describe our sport as a skill sport, which is why guys like Derrell do really well because you have to have a high sport IQ. Twenty years ago, when NASCAR teams started looking for more athletic people into pit stops, that’s where it started. It was like, let’s go get guys who are bigger and faster to do pit stops, and it was an immediate improvement for the sport. We’re in the next generation of that now. It’s not just passing the eye test anymore.

EDWARDS: It took a few years for me to get comfortable, and it wasn’t even a lot to do with the physical side of things. It was more of the mental side that slowed everything up. A lot of this stuff was foreign to me. I was deep in basketball and it’s still foreign today, seven years later.

This sport has ups and downs. It took about five years before it slowed down for me and I can see so much during a pit stop. Still to this day, though, it’s still foreign and I’m still giving max effort every time I jump over the wall to pit a race car, in practice or during a race. You learn every day. Pit stops are never the same. I don’t care if the car doesn’t move an inch, you never know what to expect. I never get in a routine during pit stops because they change every stop.

EDWARDS: I’m always breathing. When the caution [flag] comes out, I’m constantly focusing on my breathing to calm down. I’m not a guy to get hyped up. I know physically I’m going to move fast, now I just need to calm my mind down, breathe, and take that approach. That’s where that college basketball experience comes in — shooting those big free throws at the end of the game. Those are experiences that play a big role at pit stops. There’s no point in getting hyped up because we’ve done thousands of practice stops, so your body knows what to do once you get out there.

I think a pit crew is like a symphony. One wrong note and the entire thing is screwed up. NASCAR has a saying: “Just do your deal.” That means you take care of your part and trust the other guys are going to handle their part. It’s really about trust. We travel and work out together, so building that chemistry with the team, learning everyone’s backgrounds — that plays a big role in when you’re jumping over that wall.

OSBORN: Our guys are getting really specific and tailored training methodology from Lindsey and her staff, and it’s revolutionized what’s happening in pit stops and it’s why there’s such a wide variance in performance that you see in Pit Row as well. Derrell Edwards has a basketball background, but we have guys with baseball experience, pro soccer experience. We have ex Olympians from Eastern European countries. The backgrounds are a lot more diverse than people think. It’s not just a bunch of ex-college football players doing CrossFit workouts. We’ve applied a data-driven, sports science approach, and this is a very unique training environment. When we bring in people from pro sports teams, they realize we’re at the same level because of the decades of research we put into the details.

JONES: You can look down pit row and see all these teams with these jacked, ripped guys. They can pass the eye test, but they can totally suck and be the worst out there. Then you can roll to another team, and someone can look like they’re waddling around and not look that athletic and they’re smoking everyone. You really have to individualize the programming and then from there, you can build on that and be more general. You have to get to that one person, get their story and background as quick as you can.

I would say it’s more traditional than you would think. There’s a base for any athlete that you have to accomplish – strength, power, flexibility, and mobility. There are those core values that always have to be there and with this sport being so specific, we do plan little accessory things for each positional guy, whether that’s with prehab, post-practice or in the weight room. We have a lot of opportunities to get our hands on these guys and try and change, mold, and create what they need to be the best out there. It’s personalized like with any sport but it’s also positional.

JONES: We’re always trying to let our athletes know and inform them that sleep and water are the two biggest things you can do and they’re the easiest you have control over — sleep, food, water, and doing it in a very purposeful way. We have our registered dietitian guide you, having older teammates give you tips, especially because of the travel, which is is very strange. Not many sports travel the way we do and come back home and get back into it very quickly, so recovery is huge. We do little things like compression wear and cryotherapy — all those things are giving our guys that little bit of an edge over people who are kind of complacent and going through the motions of training.

Derrell Edwards recently turned 30 and is focusing on longevity going forward. He mentioned the detail and care LeBron James focuses on his body as being an example he strives for. Derrell Edwards mentioned weekly visits to Stretch Lab, deep tissue massages, and compression gear being staples in some of the ways he’s making sure he gets the most out of his body.

Vinho Verde Might Just Be the Perfect Summer Wine

JONES: Most guys are reluctant to come into the training room based on their previous experience in college or profession because a lot of places see that as weakness or you’re not at your peak physical ability when really, it’s preventative care and maintenance. If you’re doing it right, it’s a positive thing. Physically, they have to learn new things so that’s kind of taken care of a little bit purely because of the nature of a pit stop.

OSBORN: It all comes down to their moves are so repetitive. Because we’re a non-contact sport, we don’t see these major catastrophic injuries. Right now, in Joe Gibbs Racing, we’re looking at an average of a 13½-year career for each athlete we have. If you have a top-tier guy, you want him to be able to do this for as long as possible. Lindsey does a lot of work to help mitigate what we call the “itises” that are generated through the overuse of some of the areas of very specific movement.

JONES: Every jackman has the same limited range of motion or excessive range of motion in their right to left hip because they bend over, twist, and hang a tire the same way all the time. So I can see that building. Now that we have more new people, it’s interesting to see the progress that they make from being a raw basic human athlete to getting more specific with this sport and it does change your body rather quickly. We can catch it, see it because of our experience with the older guys. That’s part of the prehab, warmups, and all the things we really have our hands on. They really let us get in there and let us do what we need to do to make these guys prepared, ready, and bulletproof.

Previous
Oksana Grishina Commits to Competing at the 2022 Olympia