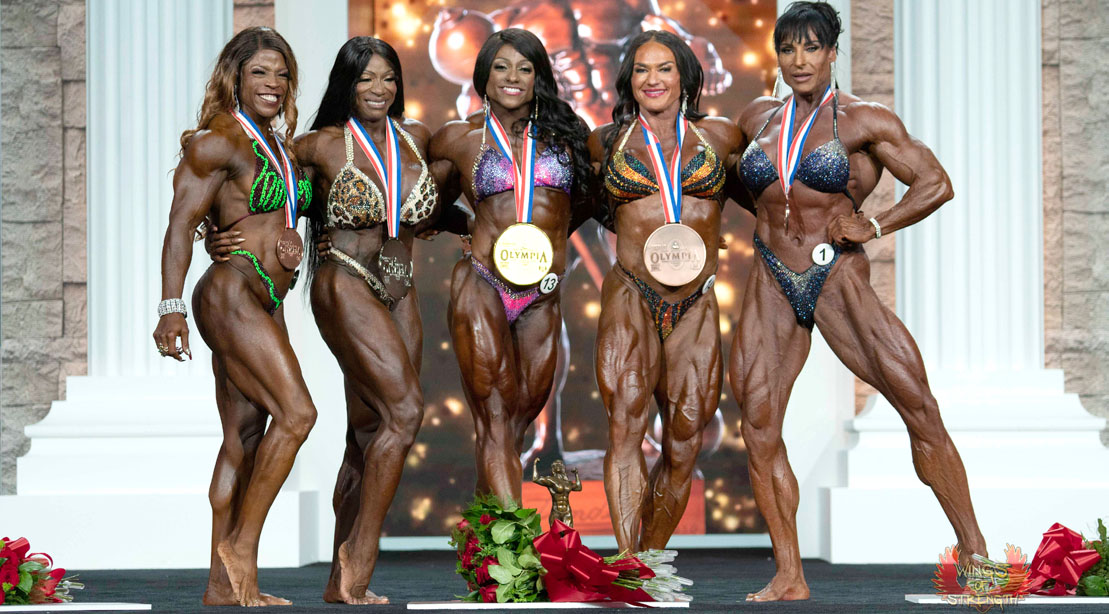 One of the big stories in women’s bodybuilding in the last couple of years has been the influx of physique competitors who have moved up to compete with the big girls – and have been spectacularly successful.

Andrea Shaw, the 2020 Ms. Olympia winner, made the transition from physique to bodybuilding in 2019. MayLa Ash, Asha Hadley and Reshanna Boswell followed in Shaw’s footsteps last year and all placed in the top 10 at the Ms. Olympia, which returned for the first time since 2014.

When these athletes talk about making the transition from women’s physique to women’s bodybuilding, they all describe it in the same way: as a liberating experience.

“Crossing over into female bodybuilding has been such an empowering, accepting and freeing journey for me,” Ash wrote on Instagram at the end of an amazing year that ended with her placing fourth at the Ms. Olympia in December.

A big part of why it feels so liberating is that, after deciding to switch from women’s physique to women’s bodybuilding, competitors no longer feel as if they have to hold themselves back and they can allow their bodies to grow and improve and fulfill their
potential. As athletes, they inevitably get to a point where they are struggling to stop becoming too dense or muscular for women’s physique. Switching to women’s bodybuilding removes those constraints. “It was like a burden was lifted,” says Shaw,
who also won the Rising Phoenix in 2020. “Now, if my body wants to grow, I can let it grow!”

Like Shaw, Ash had gotten to the point in which she was too muscular for women’s physique. But after switching to women’s bodybuilding, she was able to train heavier and push herself more. It was only after she saw how her body responded that she
realized how much she had been holding back as a physique competitor. Now she says she is “beyond excited” to see her body develop further.

Hadley had a slightly different experience. She had competed in the Olympia as women’s physique competitor in 2016 – at 5-foot-7, she weighed 160 pounds onstage – and then took a few years off. But she had always admired female bodybuilders, and when she decided to make a comeback last year, it was always going to be in women’s bodybuilding. She won the Savannah Pro in her female bodybuilding debut last August and describes it as “the best choice I ever made.”

A lot of competitors who decide to make the transition to women’s bodybuilding have to train heavier and more intensely and to work on bringing up body parts that normally would be “less developed” in women’s physique. That often means putting more size on
their legs to be able to stand next to the top female bodybuilders. Shaw and Ash also both say they never trained arms as physique competitors. Now they do — and they say they are loving it.

It is not just in the gym but also onstage that competitors feel like they are being set free when they move up to women’s bodybuilding. “In women’s physique I never truly showed my size when I posed,” says Ash. “But as a female bodybuilder, I don’t have to
hold back anymore.” She remembers how exhilarating it was when she won the New York Pro, in her female bodybuilding debut. “I was fully extending my lats, I was fully flexing my biceps, I was fully showing the conditioning of my legs and glutes. I was not holding back because I didn’t have to anymore. It was so liberating and so freeing!”

Shaw had a similar experience. But she says she had to make a mental adjustment and learn how to pose like a female bodybuilder. She remembers how, backstage after the Rising Phoenix in 2019, her second show as a female bodybuilder, Margie Martin told
her: “Be big!” What that meant, Andrea explains, was “a mindfulness to squeeze harder, show those biceps, show those legs, because they are big, and they need to be big!”

The word Hadley uses to describe how it feels to pose as a female bodybuilder is “empowering.” “You don’t have to worry about posing a certain way to hide the muscle that you have,” she says. “It’s just about trying to express it as much as you can.” She
says she really felt it during the posedown at the Olympia. “It was all of us up there showing our best and having fun and getting to really flex and show off what we wanted to show off.”

There are probably more physique competitors who are now thinking about moving up to women’s bodybuilding — especially after seeing Shaw win the Rising Phoenix and the Olympia last year. Her advice is this: “If you are women’s physique competitor and
you carry a lot of dense muscle, make the move!”

MayLa emphasizes that the key is to know if you are ready. She recommends getting feedback from judges or experts, as she did before deciding to move up to women’s bodybuilding last year.

Asha says the most important thing is not to be deterred by stereotypes about female bodybuilders. “Don’t get caught up in the label or the stigma,” she says. “If you see that you’re looking bigger than the rest, and you look like to lift, and you get that feedback
from the judges that you’re pretty muscular, women’s bodybuilding is probably where you belong.”

Perhaps the most beautiful image that captures how physique competitors feel about crossing over into women’s bodybuilding was from a comment made by MayLa. “It may sound odd, but the only way I can describe how it feels to be a part of women’s bodybuilding is that I’m home,” she says. “I feel like in this division I’ve finally made it home.”

Previous
Trataka Sadhana 101: How To Deepen Your Next Meditation Using Candles

Next
‘Assembled’ Docuseries Looks at the Making of the MCU

Elevate your workout to the next level.
Go to Appearance > Customize > Subscribe Pop-up to set this up.
More Stories
Hair Lab: Feeling A Little Thin