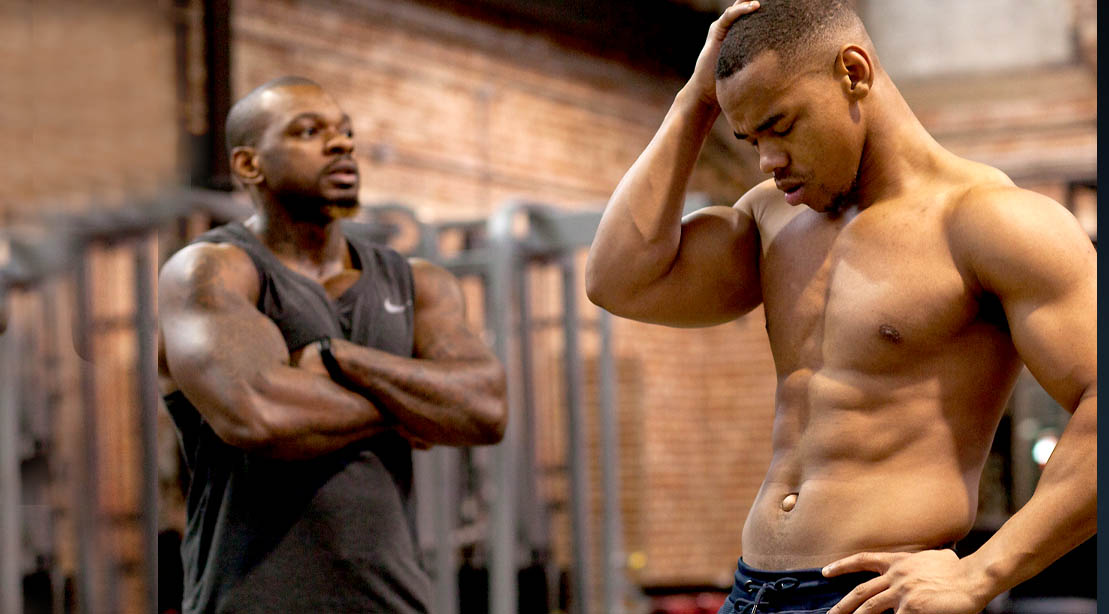 Joivan Wade looks every inch the superhero as Victor “Cyborg” Stone in HBO Max’s Doom Patrol, but the 28-year-old actor’s journey to prominence all started from humble beginnings.

As an actor and entrepreneur, Wade has learned that crushing life’s goals is all about making his own opportunities, so M&F sat down with the fast-rising star from Bromley, South East London, to find out how he transitioned from sports to screen, and how he finds time to work out between busy filming schedules. We soon discovered that the buff Brit is channeling his own inner superhero.

As a young man, Wade’s family instilled upon him that the world was his for the taking, if only he was prepared to work for it. It’s a lesson that has shaped his destiny. In growing up with a father who sang in a family gospel group known as “the Wades,” the South East Londoner’s eyes’ were opened early to the fact that he could go anywhere, and be anything that he desired. “My dad, and my uncles were the leading gospel group in Europe,” he says proudly. “They toured everywhere, from the U.K., Europe, Australia, and America. With my family, growing up, it was either music or sports.”

Indeed, Wade loved both and soon followed in his brothers’ footsteps by playing soccer. “My dad built a mini [soccer] academy called Downham Village,” says Wade. “In the heart of Bromley Downham [in South East London], he had around 800 kids. He built a [soccer] team for the under 8s, all the way up to a men’s team.”

Wade played for his dad’s team as a youngster before moving up to semi-pro and catching the eye of scouts at Charlton Athletic (where his younger and older brother also played by this time) and Crystal Palace. “I was also doing some trials at Millwall,” he says. “Across the board, my family has always been into football. My cousin is Jordon Ibe, who played for Liverpool (and now plays for Adanaspor in Turkey’s TFF First League).”

In tandem with football stardom, Wade also harbored ambitions of becoming an actor and excelled in school drama classes. “My biggest inspiration was Will Smith,” he says. “I would watch a lot of his movies and The Fresh Prince of Belair, and just see how that made me feel. I was like, ‘I wanna make people feel like that.’” Eventually, while playing football for his local team Fisher Bromley, Wade started to realize that acting was his true passion, and so he applied to join the famous BRIT school, where former pupils include Adele, Amy Winehouse and Tom Holland, just before entries were cut off for the following term.

Joivan Wade Creates His Own Opportunities

Far from sitting and waiting for roles to be offered to him, Wade teamed up with his peers to create Mandem on the Wall, an instant YouTube hit that has led to additional social media projects like The Wall of Comedy. “I’ve always said that hard work beats talent, when talent doesn’t work hard,” says Wade. “Nothing is owed to you, you gotta earn everything.”

Wade’s success is very much the product of his drive to create his own opportunities. The profile that he gained from his social media projects would help him become a household name in the U.K. by landing a part in the popular soap opera, Eastenders. He also appeared in Dr Who, and various other projects ahead of making trips to LA, where he scored his film debut in The First Purge. And, despite those long shooting schedules, Wade has made sure to keep in shape. “I started taking fitness real serious when I stopped playing football, at around 16,” says Wade, who understood that giving up football would force him to find other ways of keeping fit. “That’s when I really started going hard in the gym.” The actor is a strong believer that no matter the demands on his schedule, he will always make time for the things that he loves. If that means working out during a lunch break, then so be it. If a day looks to be filled with blocks of filming on set, he will simply wake up an hour early, to avoid skipping a gym session.

Joivan Wade is a Fitness Hero

Upon joining the cast of Doom Patrol in 2019, the young actor knew he would need to take his training up a notch in order to play the role of Cyborg. “When I was younger, I would train maybe four times per week, and I would rest more,” says Wade. “On my off days, I wouldn’t do anything, but now I’m training seven days a week. I’m training every single day. I’m in the gym doing something, whether I’m lifting, swimming, or doing cardio, to build this superhero stature and body.”

The hard work has paid off because Wade has put on 40 pounds of muscle since acquiring the role. And, like all great superhero groups, he’s conquered the gym with a trusty sidekick. “I started working with my personal trainer, Lorenzo Everhard,” says Wade. “He’s an IFBB Pro bodybuilder, and he helped me to understand and school me in how I can get that elite body.”

It all started with Wade ramping up his protein intake and slowly loading heavier plates. “I’m training for four or five days a week on weights and two to three days per week on cardio,” says Wade. “I do low carbs, but I’m on a vegan diet right now,” shares the actor, who is cutting down ahead of shooting the next season of Doom Patrol.

For Wade, reducing his sugar intake has helped him to cut weight, along with staying clear of fatty foods and avoiding those hidden enemies of the shred; such as oils and dressings.

“Once I’m shredded, and I’ve got back to a stature that is completely carved, then I’ll start to increase the protein and layer on muscle on top of that cut, which gives me the perfect physique that I’m going for,” he shares.

And it’s not just superheroes who can join Wade and Everhard on their quest to improve their fitness. The dynamic duo have also now released the “Wades Workout x Train Everhard” app for anyone who wants to train like a superhero. The platform is suitable for all fitness levels and contains workouts, nutritional advice, and even motivational dialogue from your top team.

With his acting, business interests, and a desire to encourage young people to create their own opportunities all laser-focused, Joivan Wade is not just a superhero on screen but he’s also an inspiration for anyone looking to crush their own life goals.

Previous
How To Apply Natural-Looking Concealer Like A Makeup Artist

Elevate your workout to the next level.
Go to Appearance > Customize > Subscribe Pop-up to set this up.
More Stories
A Hairstylist’s 4 Tips To Revive Your Natural Curl Pattern