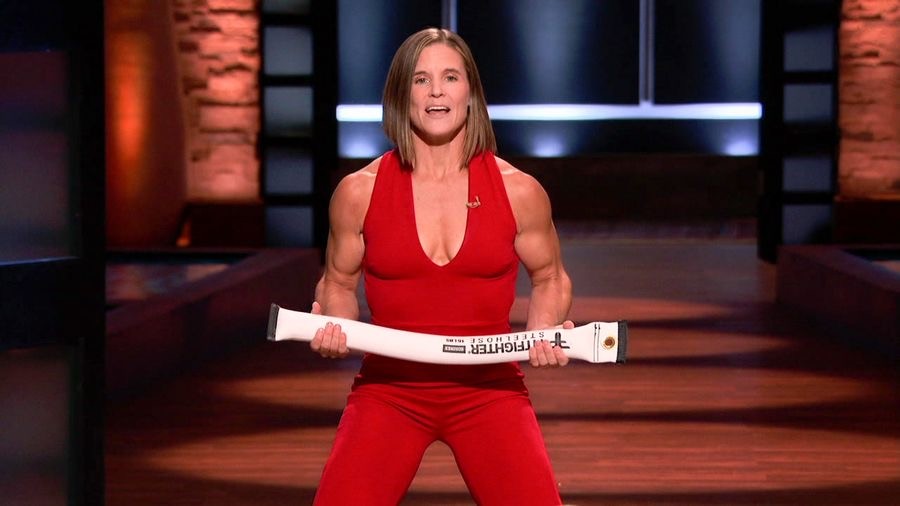 How Sarah Apgar and FitFighter are Changing Fitness

En route to globally expanding her fitness brand, FitFighter founder Sarah Apgar first needed to swim through a roomful of “sharks” —these sharks, though, had giant checkbooks in place of a hammerhead.

Her product, the Steelhose, an “all-in-one” workout tool with the look and feel of a firehose and the ability to mimic anything from dumbbells to kettlebells, already had generated buzz among top trainers and America’s largest fire department. However, landing a much-needed $250,000 investment partnership with Kind Bar CEO Daniel Lubetzky, during her presentation ABC’s Shark Tank, was the financial support Apgar needed to reach fitness masses around the world.

“We went from maybe having 2,000 people know about FitFighter, to now millions knowing about us after the episode,” Apgar says. “Our customer service team has been going 24-7 since [last week].”

The name FitFighter, according to Apgar, symbolizes readiness for any situation, which could also apply to the Maryland-born entrepreneur’s background. The mother of two served in the Army in Mosul during Operation Iraqi Freedom following graduation from Princeton, where she was an All-American rugby player.

Even after landing what she thought was a perfect job as director of new stores at prescription eyeglass retailer Warby Parker, Apgar wasn’t quite ready for civilian life post-military. She decided to volunteer with the Halesite Fire Department in Huntington, Long Island, NY to regain some of the Army regimen missing from her routine.

“I had a really challenging time transitioning out of the Army because I liked Army lifestyle,” Apgar says. “I liked the expectations that were set and being in a team setting all the time. I missed that camaraderie, and the volunteer fire service felt like a way to just have a bit of that community and lifestyle back in my life. And it definitely accomplished that goal.”

Getting a sense of how firefighters trained for their roles and noticing some gaps, Apgar began creating Steelhose prototypes in her garage, cutting pieces of firehose then filling them with sand, creating a tool that created the feeling of dragging a 150-foot, fully-charged fire hose behind you and hauling it up stairs and around corners.

“For me, when the business director at FDNY took 20 seconds to watch what I was doing and brought out the department’s fitness instructors and strength and conditioning coaches, this was the moment I felt like my idea was validated.”

Apgar soon discovered that along with simulating firefighter-like movements, the Steelhose, which comes in sizes ranging from 5 pounds to 40 pounds, can also serve as a full-body workout tool that can replicate exercises normally done with a dumbbell, barbell, kettlebell, Bulgarian bag, medicine ball, and even a sledgehammer.

In addition to being able to perform any type of pressing, pulling, curling moves, Apgar designed the Steelhose to withstand constant slamming and tossing, and dragging on all surfaces.

“FitFighter was really born out of the idea that this was not just a firefighter training tool,” Apgar says. “This was a tool that is going to be for anyone from everyday athletes to tactical athletes to even couch surfers. Our roots are in firefighting, but the future is a long game of changing the nature of fitness for everyone.”

“[Jason’s] been like, a mentor to me in the fitness business,” Apgar says. “So when a person like Jason calls you and says, ‘I think you have something really interesting.’ To have validation from such a really important industry influencer makes you feel like you soared to the top of the pyramid.”

While growth within the fitness community remains her top goal, staying involved with the military remains a priority for Apgar. A portion of sales go to the Steven Stiller Foundation, which aims to help wounded veterans reacclimate to life back home.

And as the Army recently revamped its fitness test, Apgar would like to see FitFighter applied to the Military. The Army recently changed its fitness test, eliminating the traditional pushups, situps, and 2 mile run test and replacing it with specific warrior and battle drills to enhance battlefield readiness. Apgar hopes she can one day find a way for FitFighter to help our military stay ready.

“I would love to be allowed to have a voice when it comes to offering solutions for weight training for military members and soldiers,” Apgar says. “It’s really hard to have gyms and performance centers and get people to them and you’re out in the field. I think we should hand those who enlist a Steelhose in connection with the military and then say, this is cool.”

Previous
Tight Hips Giving You Grief? Loosen Up & Let It Go With This Yoga Pose