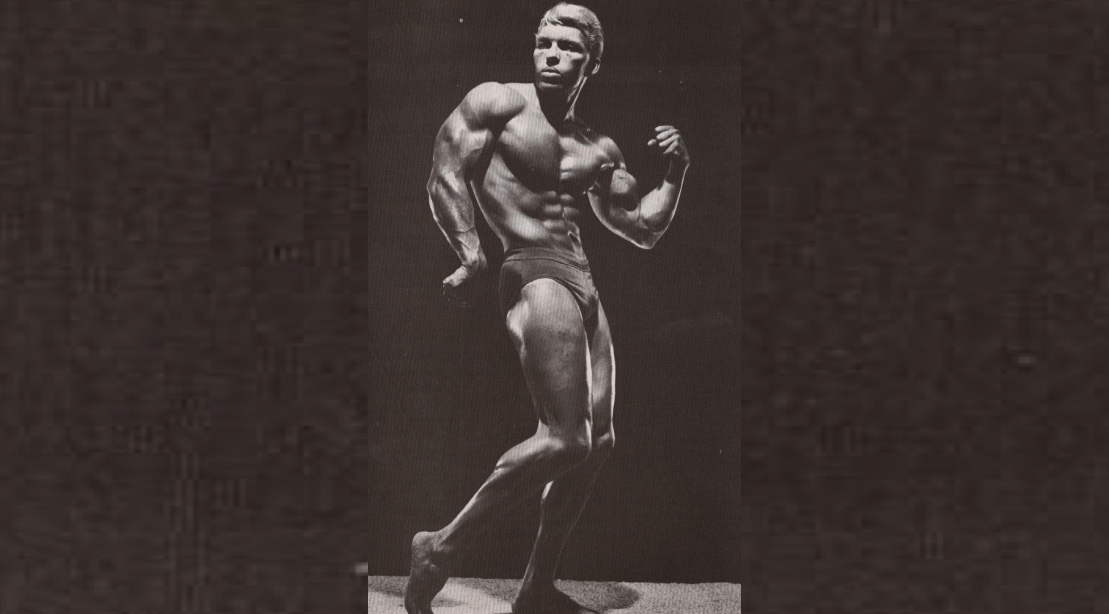 We lost a historic figure in the bodybuilding world when Gene Mozee died in Santa Monica on July 4th, age 82, as a result of heart disease. Gene had been in failing health for quite some time. But, thankfully, before he passed, he went to his archives and retrieved some of his most iconic photos for me to scan and digitize.

Some of the best were of Arnold Schwarzenegger, whom Gene met when they were both training at Vince Gironda’s gym right after Joe Weider brought Arnold to the U.S. and began promoting him in Muscle Builder magazine.

The legendary John Grimek said Gene was “the first and best bodybuilding photojournalist.” According to the Iron Guru website, Vince Gironda, himself a legend, called Gene a “walking bodybuilding encyclopedia.” As a prolific sports photographer and writer, Gene’s photos constitute a vivid record of the earlier days of modern bodybuilding.

Gene was the first lifter to bench 400 lbs. with a two-second pause—at a bodyweight of only 200 pounds. So, it’s understandable that his introduction to Arnold was by way of the bench press. Gene was working out at Vince’s Gym in Los Angeles in 1969 when Arnold began training there.

When Arnold first began training at Vince’s, Joe Weider, the master publicist, asked Gene keep an eye on him. Smart as he was, Arnold was new to the U.S. and the culture of Los Angeles. Joe was concerned that the wrong sort of people might begin to influence his new protégé.

Gene was “the right person at the right place and time” when it came to doing photos of the major stars of the 1960s and 1970s. His interest in bodybuilding developed and at the Mr. Los Angeles competition, when a chance meeting with Ed Fury led him to start training in earnest. Fury took young Gene and his brother George under his wing to Muscle Beach, where they met champions like Steve Reeves, Malcomb Brenner, Armand Tanny, Marvin Eder, Dominick Juliano, Al Berman, Joe Sanceri and Zabo Koszewski.

As a competitive bodybuilder, Gene won several trophies and “Best Poser” at every event that held this subdivision.

While attending the Los Angeles College of Chiropractic, he was the editor of the college’s newspaper, where he came to the attention of Walt Marcyan, who offered him the job as editor-in-chief of Physical Power Magazine. Accepting the position, Gene soon realized that the magazine needed more photos to go with the excellent training articles primarily aimed at athletes. So, he began studying photography.

He began taking pictures of his gym members, including future champions Don Howorth, Gordon Wong, Alex Delianedis and Bernie Ernst. He then learned muscle photography from Wolf Schramm and Russ Warner. Peter Gowland, one of the great glamour photographers back in the day, helped him with glamour photography and Gene won awards for his photographs of beautiful girls.

Actually, when I first began shooting photos of fit and fabulous females back in the 1970s, Gene had already been doing the same thing for quite a while. But it is because of his bodybuilding photos of great champions like Arnold and Larry Scott that he is best remembered today.

As he was developing his photography skills, Gene went to work in the movie industry for Paramount Studios, MGM and Warner Brothers in the photo department for six years. With this extensive background, he’s had more than 100 magazine covers and 3000 photographs published.

As a writer, he wrote more than 2,000 articles about bodybuilding and 20 training booklets for such superstars as Arnold , Larry Scott, and Franco Columbu.

He was the editor-in-chief for Joe Weider’s Muscle Builder Magazine during Arnold’s peak competitive years and his photos and articles helped launch the careers of such legendary champions as Mike Mentzer, Robby Robinson, Denny Gable, Roger Callard, Bob Birdsong, and Dale Adrian.

Gene was also a senior writer for Ironman for 12 years, and his series Mass From The Past was a very popular feature.

Gene Mozee, RIP and thanks for leaving us all of these terrific and historic photos.

Previous
Intellectual Foreplay Is A Thing: 16 Ways To Turn On A Sapiosexual

Elevate your workout to the next level.
Go to Appearance > Customize > Subscribe Pop-up to set this up.
More Stories
There’s A Class For That