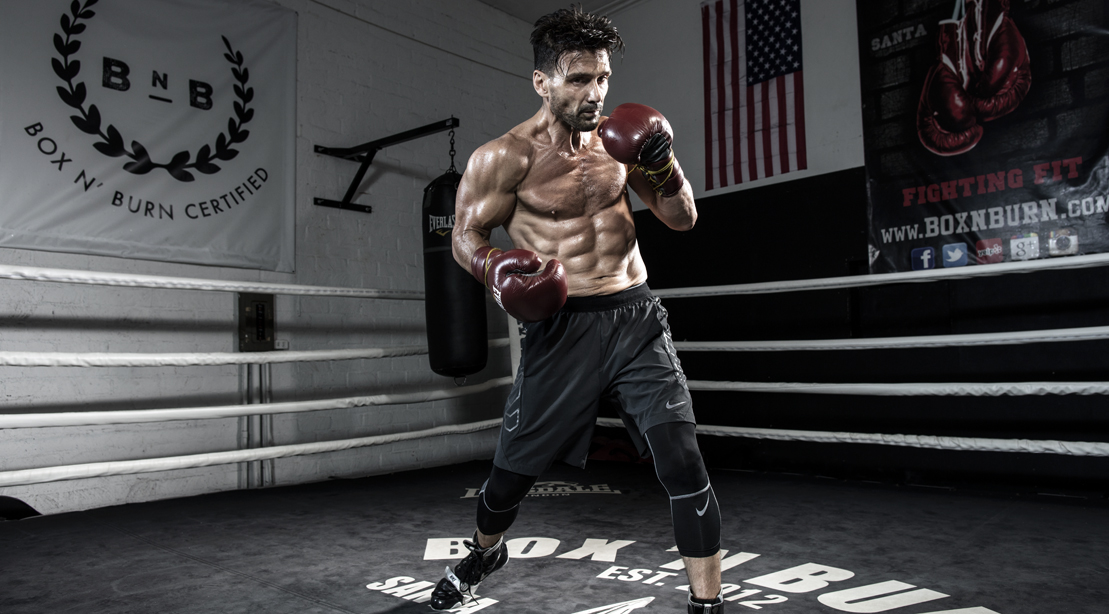 Frank Grillo is Staying Ripped After 50

KING OF THE RING

“For his age, he can take a punch,” says van Heerden, who’s 28 with a 24–2–1 record. I watched the two of them go at it for our photo shoot at Box ’N Burn. Grillo didn’t look out of place, and van Heerden didn’t seem merciful.

“He’s got great footwork,” he says of Grillo, “and a little overhand right he loves throwing. I think he could have made it as a boxer. There are
a lot of young boys he would make pay.” I’m wondering if Grillo ever rang van Heerden’s bell, so I ask. “No comment,” he says, smiling.

“I love training more than acting,” says Grillo. “But there’s not a career there for me.” But if he were 20 years old again? “Yeah,” he says, he probably would have tried to pursue boxing. “But then I would have fucked up my life,” he says, laughing.

Outside the ring, Grillo doesn’t go looking for fights, but he’s not above using violence to settle disputes if the other side is willing. He admitted to punching out a loudmouth on the street in an interview on Jimmy Kimmel Live!, and he says there have been times when crew members on his sets were acting disrespectfully and tensions almost came to blows.

“I’m the first one to say, ‘Let’s just go outside,’ ” says Grillo. But he knows the consequences. “I could lose everything. Not that I have that much, but I could lose it. I get those speeches from my agent a lot.”

Grillo admits he doesn’t go out as often as he used to, since roles in DirecTV’s MMA drama Kingdom and the movie Warrior, in which he played another MMA trainer, have made him a target for wannabe tough guys in the same way Rocky did for Stallone and The Fast and the Furious has for Vin Diesel.

“People like to challenge you. They read stuff like this [he points to the notes I’ve taken], and they want
to see if you’re really a tough guy. Guys need to make themselves look harder than they are. But if you’ve had any kind of training, you can immediately tell if a guy’s ever had an altercation.”

Grillo’s authenticity as a badass has made him an obvious choice for violent and heroic characters, which he enjoys playing but sees as a double-edged sword. He looks for roles that let him draw on his blue-collar roots and athleticism but is wary of being typecast as a thug or bruiser. He’s particularly proud of his work in 2014’s The Purge: Anarchy, wherein he played a cop who, while out to avenge his son, shifts focus to protecting innocents.

“You saw the vulnerability and pain the character was in. If I’m doing a movie where there’s an emotional payoff at the end of the journey, then cool,” he says. “If it’s just a rote, paint-by-numbers tough guy, then I’m not interested.” Grillo acknowledges that his look, and, yes, his muscles, can be limiting in the eyes of movie directors, but he sees great potential in his niche.

“I’m certainly not going to be in The Danish Girl,” he says, “but I don’t mind that. I had this discussion with CAA [Creative Artists Agency] recently. I have a certain look, and we don’t need to be afraid of it. We need to lean into it. Let’s find great scripts, work with great people, and elevate the genre.”

What Grillo aspires to do is fill the void left behind by his heroes: 1970s action stars like Steve McQueen and Charles Bronson—men who were physical and undeniably tough but not larger than life. Not comical. “Those movies were about real people, no gimmicks. Look at The French Connection, Death Wish, and Escape from New York. They were unapologetically unsentimental. I think The Purge: Anarchy showed Hollywood that people still like movies like that, and I’m in a small pool of guys who can sell that. A lot of times movies get made, and I don’t really believe that the guy who’s doing the action is really ‘the guy.’ I think that maybe all the stuff that I do makes me the guy.”

Elevate your workout to the next level.
Go to Appearance > Customize > Subscribe Pop-up to set this up.
More Stories
An Astrologer’s Favorite Way To Tap Into All Things Gemini Season