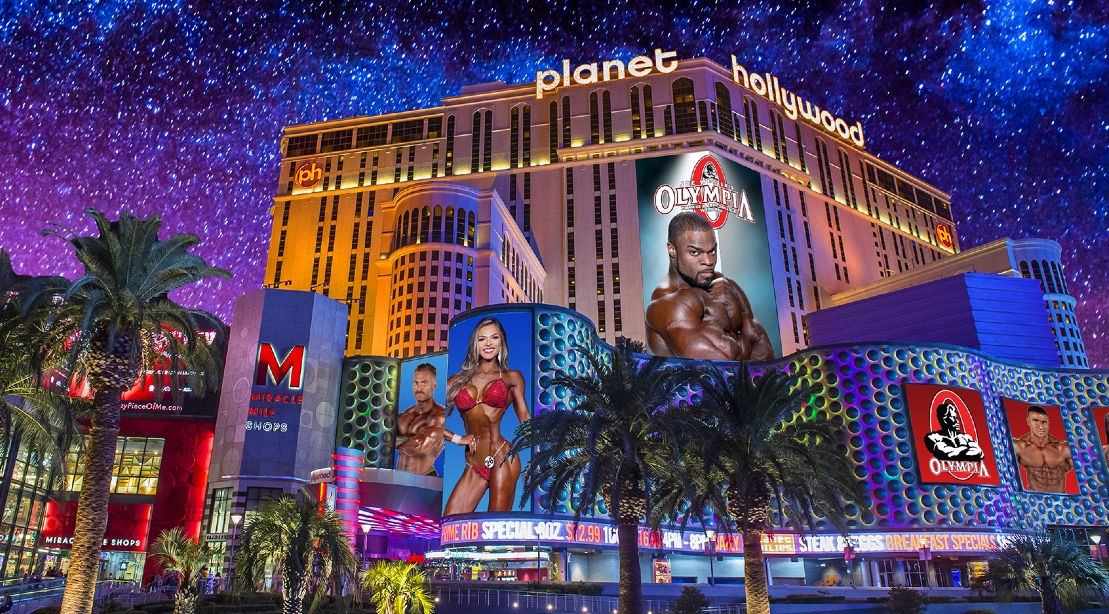 Everything to Know About the Olympia’s New Venue: Planet Hollywood Las Vegas

The 2020 Joe Weider’s Olympia Fitness & Performance Weekend, widely regarded as the Super Bowl of the fitness industry, will feature the returns of Phil Heath, Flex Lewis, Iris Kyle, Oksana Grishina, and Adela Garcia, along with the last-ever competition of Dexter Jackson, and the revival of the Ms. Olympia contest.

While there’s a lot to look forward to onstage, it shouldn’t be lost on anybody that there’s another huge factor that will make this year’s Olympia unlike any other: Planet Hollywood Las Vegas, located on the iconic Las Vegas strip. One of Sin City’s most iconic locations, Planet Hollywood reopened its doors to the general public on Oct. 8 and its iconic Zappos Theater will play host to the 2020 Olympia Finals.

And unlike prior years, there’s no need to leave the host hotel since the Olympia Fan Pavilion — which replaces the traditional convention center expo — will take place at Planet Hollywood as well. The fan pavilion will be held in a prominent 30,000 square foot open area directly above the Planet Hollywood Casino.

There’s so much to do you might just get lost walking around the site — but no need for that. To help you make the most out of your trip, we’ve written up some of Planet Hollywood’s most iconic attractions along with some you may not have known about.

So whether you’re looking to return home with a little extra pocket change, are in the mood for a quick cheat meal, or have the urge to tie the knot during Olympia weekend, we’ve got you covered.

But you should act fast — this year’s Olympia is already shaping up to be one of the most exciting in the contest’s history, and you’ll want to be there to witness it in-person.

Tickets and hotel room opportunities for the December 17-20 event are now available at MrOlympia.com as Trifecta Presents Joe Weider’s Olympia Fitness & Performance Weekend, brought to you by Wings of Strength and by Northern Chill.

Previous
Do You Need To Wear Shoes For At-Home Workouts? Trainers Explain

Next
Five Things to Know About Apple’s New iPhone 12