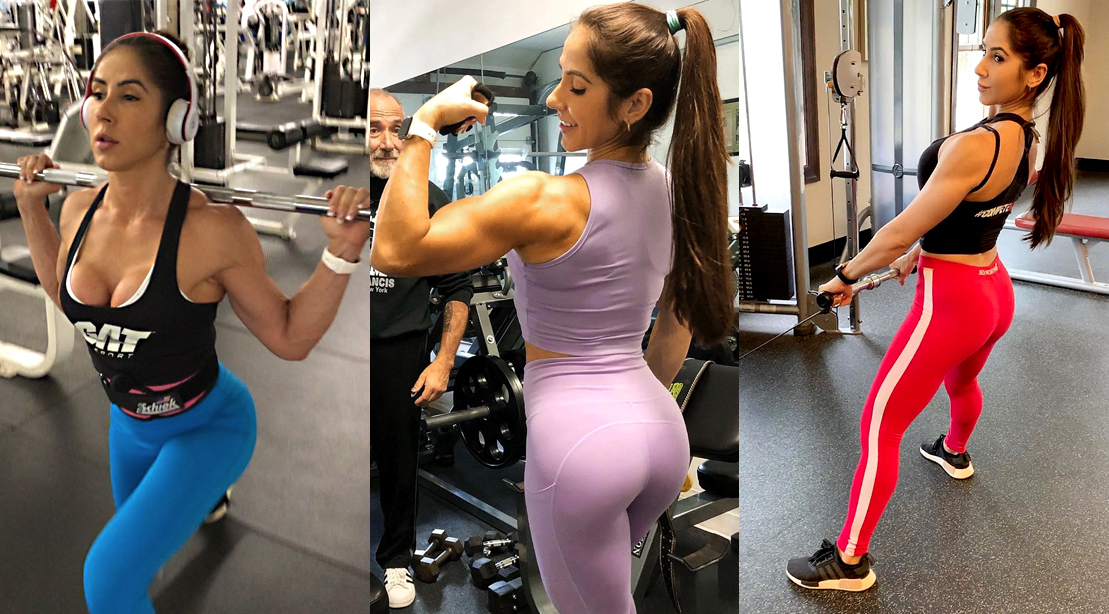 Angelica Teixeira is a two-time Bikini Olympia champion, and a look at her training and diet regimen offers a brief explanation as to why she’s been at the top of this division over the past few years.

“I usually have two meals, work with my online clients in between and have Skype posing clients, then after two meals I go to the gym and do my weight training, followed by 30 minutes of cardio (usually stairmaster or HIIT). When prepping for contests, I will add a second cardio session of 30 minutes at night, or sometimes fasted in the morning (usually inclined walk).”

Angelica’s workouts are based around supersets. This way, she’s able to incorporate a lot of volume in a relatively short amount of time.

During the off-season, Angelica does 20 minutes of cardio right after her strength workout.

“During prep I start with 30 minutes after training and increase slowly going up to two sessions of 30 minutes if needed. My favorite cardio is stairmaster, inclined walk, and HIIT.”

If she could choose only one exercise as her favorite, Angelica says it would be glute kickbacks. She says this exercise has helped her develop her glutes more than anything else.

Angelica has a similar diet both in the off-season and during contest prep. She eats six meals per day, making sure to have some sort of protein in each of her meals. At least four of her meals consist of complex carbohydrates such as oatmeal, rice, and sweet potatoes. She also adds healthy fats such as peanut butter, avocado, egg yolks, and nuts.

Lastly, Angelica also adds a lot of vegetables and fruits to her diet. They’re rich in fiber, which enables her to efficiently absorb nutrients from foods. “I don’t eat much fruits during prep, usually only blueberries and strawberries. During off-season I will add more fruits like banana, papaya, and mangos.”

The main difference between Angelica’s off-season and in-season diet is that she’ll add those extra carbs during the off-season. As a result, she feels this helps replenish her muscles to give her more energy during her workouts.

Here are Angelica’s top rules for achieving a lean and toned figure:

Previous
Hair Growth, Other Benefits & How To Do It

Next
What The Bachelorette Got Wrong About Love Languages

The Complete Guide to Seasonal Produce for Nutrition, Health, and Wellness Coaches