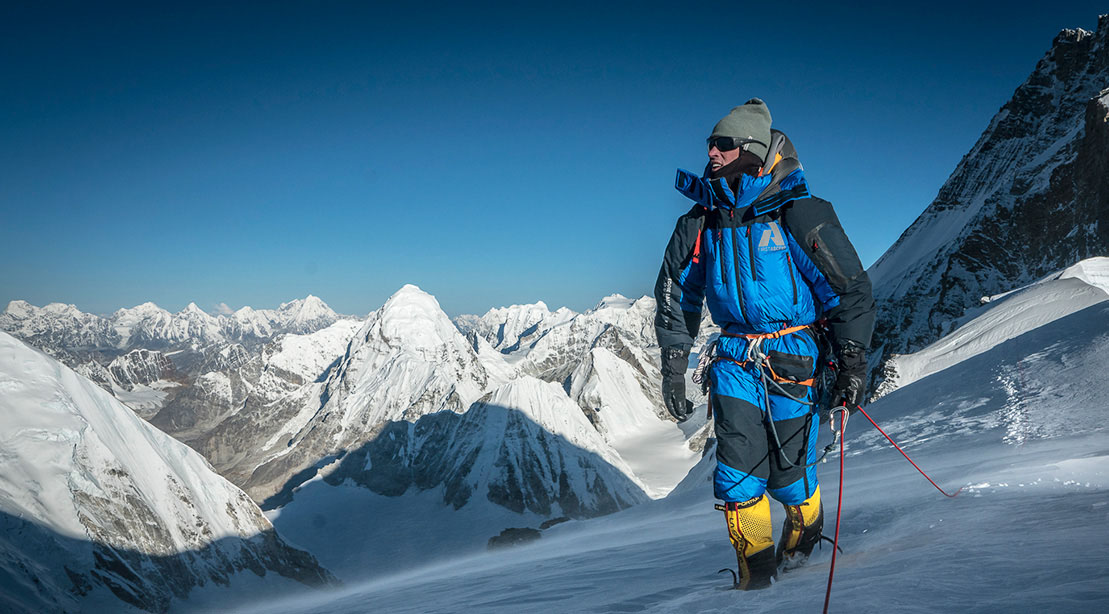 Ask the legendary climber and skier Adrian Ballinger if he considers himself an “adrenaline junkie” and he’ll say that he doesn’t believe that to be the case. Instead, the 45-year-old has pioneered some incredible climbs without the use of supplemental oxygen and is a self-confessed “logistics nerd.” Ballinger says that if he’s feeling adrenaline on one of his expeditions, it’s because something is going wrong.

Thanks to his vast experience, having led over 150 international climbing trips on six continents, Ballinger has become one of the worlds most qualified climbers. He’s also the only American to have completed three ski descents from 26,000 feet.

Born in Cheltenham, England, Ballinger moved along with his family to the United States and a life-long passion for climbing would soon follow. He shares his experiences in this base-to-summit guide to climbing with “Muscle & Fitness

“My first initial climb, I was around 12 years old,” says Ballinger. “A family friend’s dad took us out, and we started rock climbing in Massachusetts. That’s where I got the first taste of being off the ground, and exposure, and being on a rope, and things like that.”

1. Get Acclimated with the Great Indoors

Ballinger says that indoor climbing is a great way to enter the sport because it is more controlled, with friendlier conditions. “You get a little bit of experience with the technical side, ropes and things like that,” he shares. “You get to move your body and figure out your center of gravity, and then you also enter the (climbing) community and meet people who love these sports.”

The record-holder says that the best way to transition to the outside is with the assistance of an expedition guide company such as the one he has been running for 25 years, Alpenglow Expeditions. “My company, and many others really focus on how to bring people from the inside to the outside,” says Ballinger.

If you are ready to get outside for a climb on your own or with a guide, make sure to respect the conditions and know your limits. Ballinger gained much of his initial climbing experience by taking on hills rather than mountains, testing his metal by going out into the difficult conditions of winter. But when he took on his first 20,000-foot peak at age 17 by scaling Cotopaxi, an active volcano in the Andes Mountains of Ecuador, the relatively inexperienced climber filled a last-minute slot on a guided climb, but soon learned how difficult the challenge would be.

“I was a pretty good school athlete, I thought I would crush these guys,” he says. “On this mountain I did everything wrong around altitude. I got pretty sick and ended up getting something called high-altitude cerebral edema.” It’s a potentially fatal condition far beyond mountain sickness, and can cause brain herniation.

Not surprisingly, Ballinger was unable to complete that climb and needed assistance to get down, but he recovered and after the initial fear of trying again, felt an urge to return to the

mountains in order to see if he could tackle things in a smarter way. When the teenager finally completed his first high-altitude climb, he was hooked, and went on to become one of the world’s most successful climbers, one rock at a time. “The most common thing is that someone calls me with the financial ability, and they say I want to climb Everest,” says Ballinger. “And I’m like, that’s awesome, but first we are going to start on Kilimanjaro and then Mount Rainier, and then Aconcagua down in South America.”

Ballinger says that it is difficult to train for a climb without gaining experience in the mountains, because this is where you learn to cope with unpredictable weather and get to know your own body, but since not everyone is able to train for extended periods of time in the mountains due to their location or day job, he is keen to point out that functional body workouts are a great way for new and advanced climbers to increase their strength. It is logical that the more bodyfat we carry, the greater the load when trying to travel upward.

Now in his 40s, Ballinger gives far more thought to nutrition and recovery than he did during his 20s. “I can get incredible performance out of my body, I just have to be smart about doing it,” he says. These days, Ballinger supplements with a multivitamin to support his diet. He’s also aware of the importance of magnesium, and will drink electrolytes to stay hydrated and reduce the number of cramps suffered.

At the moment, Ballinger has shifted his training toward power and cardio. “I work with a company called Uphill Athlete. There are lots of great training systems out there, but these guys have a lot of Nordic, Olympic, and big-mountain experience,” he says. “Currently, about 70% of my training is focused on base cardio. We found that fasted workouts, and intermittent fasting really helps me shift from burning carbohydrates to burning more fat.” Ballinger also re-creates the action of climbing with exercises involving his bodyweight, and repeating other movements such as box steps.

Because the road to a mountain summit can take days of arduous climbing, it is usually the case that the body is broken down by the time people reach the top. When starting out, it is important to make sure that you give your body enough energy to meet such demands, but for someone who climbs as high as Ballinger, there is a certain point where eating is no longer a possibility, and that’s where the importance of burning your existing stores of fat is never greater, because the body is no longer able to digest food taken in through the stomach.

Healthy Planet, Healthy You: Climate News You Need To Know This Month

For someone like Ballinger, who pushed himself by climbing without supplemental oxygen, the stresses on his body are epic. He makes sure to take energy gels with him and will even have one last treat, such as a Snickers bar, before food can no longer be processed. It’s pretty extreme, but illustrates how essential it is for all climbers to fuel the journey.

There are many ways to track your progress during climbs. A fitness tracker is a great way to check on your heartrate and vitals, then there are GPS trackers to check you don’t go over your desired altitude level. You can also set alarms to make sure you eat at regular intervals, such as every 30 minutes. “It’s part of how you can get so much more out of the experience,” says Ballinger. “When you have put so much thought and planning into it.”

With the popularity of climbing still on the rise, humans are beginning to take their toll on the beautiful scenery that we all would like to continue to enjoy. So, be mindful of the camping equipment and wastage that is left behind.

For Ballinger, his passion for the great outdoors brought him the love of his life, fellow climbing icon Emily Harrington, and the happy couple are set to marry on the beach, this December. Before that, however, 22 of their closest friends will go back to Cotopaxi, the site of Ballinger’s first big climb when he was 17. There’s a reason we call it “The Great Outdoors,” so do your bit and make sure we can all enjoy it for generations to come. Happy Climbing!

Previous
Looking For A Boost? Why These Energy Gummies May Help*

Next
The 18 Best Multivitamins Of 2021 For Women, Kids, And More

Elevate your workout to the next level.
Go to Appearance > Customize > Subscribe Pop-up to set this up.
More Stories
Cannabis Is A Journey. Here’s A Great Place To Start