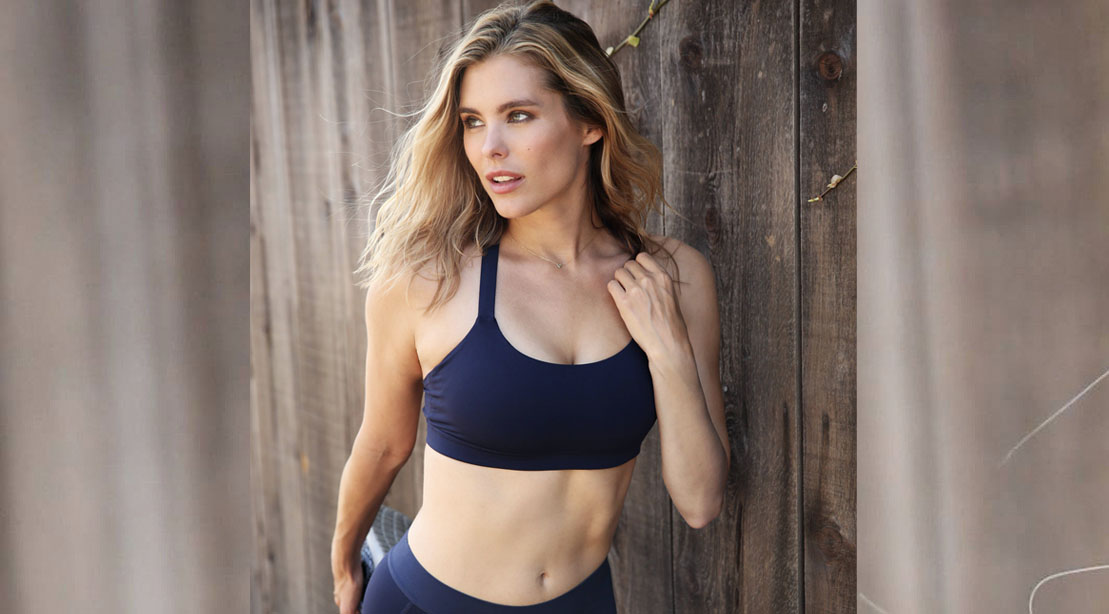 Susie Abromeit is having a stellar year. She will appear in The Forever Purge, and has also been cast in November’s King Richard, the upcoming biography of Richard Williams, the father and coach of Venus and Serena. Muscle & Fitness sat down with Abromeit, who was once ranked sixth in the United States for junior tennis, and played varsity at Duke University, to find out how she has transitioned from the court to the stage, and how she approaches health and nutrition post sporting career.

If you want to see Abromeit’s game face, ask her about The Forever Purge. Despite being excited about the upcoming movie, she is afraid to let out any spoilers. “There was some cool gun work, dealing with machinery … I’ll just say!” she laughs. “That was really awesome. I do love learning a new skill.”

That game face is the result of being around competitive sports her whole life. “Both of my parents were very athletic,” she says. “My parents were big ski racers and my dad would travel all over the world and win races. He passed away 14 years ago, but he would do the opening runs for the U.S. Ski Team, and he won a jeep for racing, so as a kid I’ve been on skis since I was 2 years of age. They were also big tennis players, but that was more of a social gathering for friends. My sister won high school championships for tennis doubles, or something along those lines, and so I was inspired to play tennis, and I took to it like a duck to water.”

Tennis started out as fun, but it soon became clear that Abromeit was naturally very adept at the sport. “It became kind of addictive, where I would play tennis until my fingers would bleed,” Abromeit says. “I would get blisters, but I wouldn’t care, I’d put on gloves so that I could go back out there and play.”

The budding tennis ace was soon noticed by a coach during a tournament, advising her mother that he saw great potential in Abromeit as a top tennis player. “Sure enough, a year later, everything happened like he said it would. I got recruited by Evert Tennis Academy, I moved there (to Boca Raton), and started training full time. My goal was to be top 10 in the country and I wanted to be sponsored by Nike, and I wanted to get a full scholarship to Duke University because it was a top school but also had an elite tennis team. I also wanted to win an international tournament, and all of those things happened.”

“It was mind blowing, but there’s a lot of pain,” Abromeit says. “There’s back injuries and you end up with the mental toughness of a warrior.”

As a young athlete, Abromeit had to understand the importance of nutrition. “My mom started reading up on nutrition when I was 12, because I would have sugar crashes, she says. “You know, I’m 12, so I’m eating Oreos and milk, just terrible food before tennis. Instead, she would make sure I ate a balanced meal with lots of protein like a chicken sandwich. Immediately it made all the different to my performance.”

As Abromeit got better at tennis, she continued to be mindful of her food intake, and practiced meditation on the advice of her coach. Abromeit also met with a sports psychologist to work on behavioral patterns during her game in order to improve her technique. As the young hopeful continued to rise in the ranks, her dreams got bigger, but so did the pressure and sacrifice. “My schedule, at one point when I was at my best, was to wake up at 5:15 a.m. and be on the court at 6 a.m. I would play for two hours, go to school, eat, then I would practice serving for half an hour. My serve got so good that it was huge weapon for me. Then I would play for another two hours either in matches, or doing drills, and then I would work out in the gym, maybe doing sprints for half an hour and then lifting weights.”

Tennis may seem like an unlikely place to discover a passion for acting, but even at the height of her success with the sport, and with those around her telling her to go pro, Abromeit had a burning desire to perform for an audience. During downtime at tennis camps, the players would get together to perform skits and let off steam. She entertained her peers so much in their downtime, that they encouraged her to quit tennis and follow her dreams as an artist. “I would get a really crazy response,” she says. “You don’t think too much about it, because I was focused on achieving these check points with tennis, and so I had to deconstruct what I thought that I wanted. I think life has a way of working itself out.”

While Abromeit’s mother had always supported her with tennis, she’d also been cheering her on as an actor, so it wasn’t the biggest of shocks when the beauty finally decided to follow her heart. “My mom entered me into a Macy’s ‘Be A Star’ competition, and I won that, and the agents were like ‘hey, we want to represent you!” she recalls. “But, I was like ‘Ah! I can’t! I have tennis!

Throughout her tennis career, Abromeit felt like her true destiny was knocking on the door as she landed roles in plays against seasoned competition. “I gave up tennis in my sophomore year because I wasn’t happy,” she says. “I was eating my feelings and I was 20 pounds overweight, and immediately after giving up tennis I was just so happy, I lost all the weight and I was getting straight A’s.”

Putting the work in

“I’ve been able to translate my work ethic (from tennis) to acting, so I’m prepared to do whatever it takes to do the best job,” says Abromeit. But despite her natural charm and charisma, there are many differences between performing for entertainment rather than sports. First, she had to work on unlocking that game face for the camera. “In tennis, you don’t cry, you have to be tough, so you have to flip that on its head,” she says.

King Richard will not be Abromeit’s first tennis movie. She’s picked up a racket, on-screen, multiple times including roles in A Gifted Man (2011) and 16-Love (2012). Still passionate about tennis, Abromeit is keen to make sure that the sport is portrayed accurately on film. “I know tennis so well that I will say if I think that something would never happen, or what might be said (during a match),” says Abromeit. “Tennis is so hard to get right because the strokes need to be authentic, and the language, and even how tennis players walk.”

“King Richard presents the most authentic experience of junior tennis, I was beside myself,” she says. “It struck such a nerve. It is next to impossible to get this world right… so I was blown away.”

Listening to her body

If her experience with sport has taught her anything about health, it is that the most important guide on your own wellbeing is to listen to your body. Abromeit, now 38, opts for organic foods where possible and has reduced her carbohydrate and red meat intake, but doesn’t feel the need to restrict herself from anything, if she feels that her body craves it.

“In an ideal world we would all be living off a farm, growing our own food and fishing from the river, cooking without preservatives or added chemicals,” she says.

Next
Most Affordable and Expensive Airbnb Beach House Rentals in America

Elevate your workout to the next level.
Go to Appearance > Customize > Subscribe Pop-up to set this up.
More Stories
5 Expert Ways Parents Can Teach Kids Forgiveness