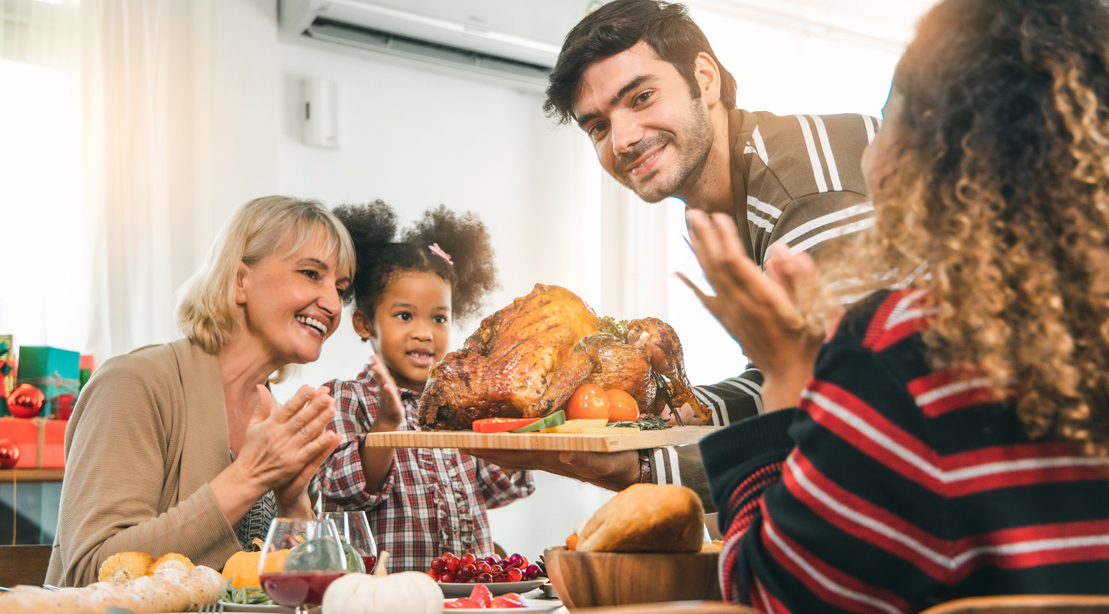 Turkey is always the main course on everybody’s mind over the holidays, but did you know that in 2019, the National Turkey Federation (yes, it’s a real organization) estimated that Americans ate 5.3 billion pounds of turkey—or 16.1 pounds per person. In 2017, 44 million turkeys were consumed on Thanksgiving alone.

The consumption of turkey—a bird that Benjamin Franklin once referred to as “respectable” and a “Bird of Courage”—has actually doubled in the United States over the past 25 years. So if you indulge (or overindulge) this year, know that you’re not alone.

That being said, turkey should actually be one of your go-to’s this holiday season (in addition to plenty of veggies on your plate). One three-ounce serving of skinless turkey breast comes with 26 grams of protein and only one gram of fat (120 calories total). If you’re a dark meat fan, both drumsticks and thighs are 140 calories with 24 and 23 grams of protein of protein, respectively.

Some things to keep in mind: take it easy on the gravy. While it’s delicious, the brown juice will only add an irresponsible number of calories to your plate an dilute the quality of your plate. Try to also take the skin off when you can—that’s where a lot of the fat will be.

While the holiday season may feel like one giant cheat day, it doesn’t have to be, especially when turkey’s on the table. Here are the surprising health benefits of the big bird at the table, so you and your family can gobble up guilt free.

Previous
What To Know About Care, Costs & More

Next
What Goes into Each Bottle of Northern Chill?

Elevate your workout to the next level.
Go to Appearance > Customize > Subscribe Pop-up to set this up.
More Stories
5-Minute Barre Routine To Strengthen & Tone Your Arms Effectively